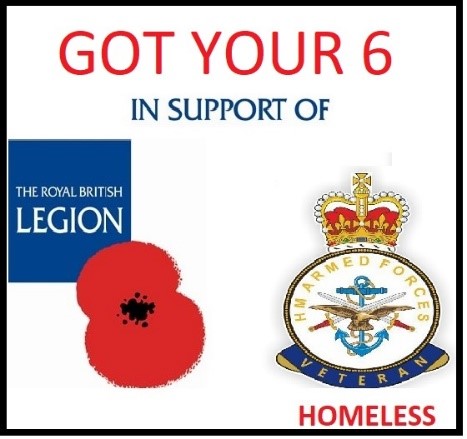 Lynx Fuels are delighted and proud to show our support for the fundraising event, Got Your 6 Sleep Out, in aid of the Royal British Legion. The Got Your 6 Sleep Out was devised by our very own driver, Jonny Bryan, alongside Shane Moore. It will involve a night of voluntary rough sleeping for these two former veterans, who wish to raise awareness around the issue of homelessness among people who have served in the armed forces. The Sleep Out will take place Saturday 25th January 2020, at Billingham Cenotaph.

This challenging fundraiser is gathering great momentum and has already attracted attention from organisations such as Middlesbrough FC. It goes without saying that the Got Your 6 fundraiser has the full support of everyone at Lynx Fuels.

Homelessness has become a big issue amongst the veteran community and has yet to receive the media attention it deserves. At Lynx Fuels we are especially thankful to the service men and women who give so much for our country, so it is only right to pay them the respect that they deserve.

“Since the draw down in recent operations in the middle east and the end of the conflicts in Northern Ireland & the Falklands there has been a large increase in homelessness, PTSD and record high numbers in suicide in the veteran community. GOT YOUR 6 campaign make these issues our top priority and will campaign hard to get this in the public eye.” said Jonny Bryan.

He continued “The Royal British Legion were selected as our nominated charity as we felt they would make the best use of donations, helping to assist struggling veterans.”

If you wish to donate to this worthy cause you can donate via Got Your 6’s Just Giving page www.justgiving.com/fundraising/gotyour6 and follow the group www.facebook.com/groups/739877846510087 for updates.

As always, Lynx Fuels are continually proud to show our appreciation for the efforts of our armed forces. To see how we commemorated the 100th anniversary of Armistice Day with our commemorative artic livery read our blog at www.lynxfuels.co.uk/news.asp?p=1023&n=Commemorating-The-100th-Anniversary-of-Armistice-Day

“What other can I say except brilliant! Definitely 5 Star .. ran out of oil on Thursday placed our order with a lovely and very helpful lady named Lesley. Explained we had ran out of our heating oil and Lesley said she would do her best to have it delivered the next day. We really weren’t expecting it until early the following week. But 8am their lovely driver rang and at 8am Friday morning our oil was delivered. We really can’t thank you enough. Highly recommend Lynx Fuels!"
Mrs W from Stockton-on-Tees

"This is the first time we have used Lynx Fuels and we found them to be very efficient. They are a nice company, they were friendly and polite from phone call to delivery, and a great price too. We would not hesitate to recommend them to a friend, colleague or member of our family. Definitely 10 out of 10!"
Mr & Mrs T, Ripon